Salvia divinorum is a unique psychoactive plant that has been used in religious ceremonies for centuries. But could its use go beyond the spiritual? Salvia has also been used traditionally as a painkiller at low doses, and recent research suggests that Salvinorin A, the main psychoactive compound in Salvia, may be the key to developing a non-addictive painkiller. Could this mystical plant really have medical potential?

A common issue with modern painkillers is that they are often very addictive. Many effective painkillers, such as morphine or codeine, can lead to addiction with improper use. In America, more people die from prescription drug abuse than heroin. An ideal painkiller would relieve pain without causing addiction; this is where Salvia may come in useful.

Typical painkillers, like morphine, activate the mu-opioid receptor (MOR). Activation of this receptor is thought to be a factor in addiction, causing euphoria as well as relieving pain. Salvinorin A, Salvia’s active ingredient, activates the kappa-opioid receptor (KOR). Drugs that activate the KOR can sometimes have painkilling properties; ketamine is one example. Most importantly, KOR activators don’t have the addictive properties that MOR activators do. 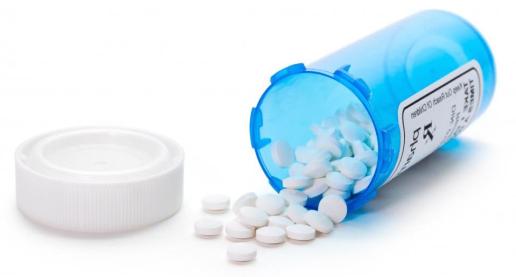 Prescription painkillers are abused more often than heroin in the US

But it’s not as simple as switching from MOR activators to KOR activators. KOR activators have their own problems when used as painkillers. They often cause unpleasant feelings, including nausea and confusion. Not to mention, KOR activators (especially Salvinorin A) can have intense psychedelic effects.

One group tested the natural painkilling properties of Salvinorin A in mice. They found that injecting mice with as little as 10 micrograms of Salvinorin A reduced their response to uncomfortable stimuli, such as a steadily warming hot-plate (McCurdy et al 2006). Although the effect was short-lived, and only a few forms of pain were measured, this study seems to indicate that Salvinorin A could be a natural painkiller.

Although this is promising, Salvia by itself won’t be an effective painkiller: its effects don’t last long enough and patients won’t necessarily want to go on a psychedelic journey each time they want to treat their pain. 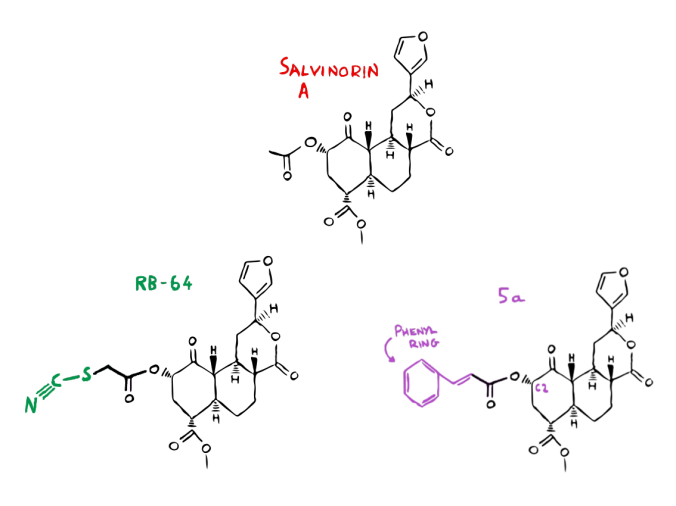 Salvinorin A and two analogues with potential painkilling effects

Salvia may have provided scientists with a unique means of solving the problem of addictive painkillers. It seems as if this ancient plant, used as a religious conduit for centuries, could also hold benefits for our modern society.

A previous version of this blog post was originally posted on coffeesh0p.com in September 2014.

White et al (2015) The G protein-biased kappa-opioid receptor agonist RB-64 is analgesic with a unique spectrum of activities in vivo. Journal of Pharmacology and Experimental Therapeutics, 352:98-109.