Psychedelics have huge potential to benefit society in a number of ways – but perhaps the most immediate is the treatment of suffering. From psilocybin as a salve for end-of-life anxiety in cancer patients 1, to LSD as a potential treatment of alcoholism 2, psychedelics are increasingly showing their medical value. Recently, a group of investigators from UCL headed by Dr Robin Carhart-Harris and Professor David Nutt, have released a handful of studies investigating psychedelics, supported by the pioneering Beckley Foundation. All together, these studies support the idea that classic psychedelic drugs like psilocybin and LSD could lead to new treatments for depression. Hundreds of millions of people suffer from depression worldwide, and around a fifth of these people have not found relief from antidepressants. This ‘treatment-resistant’ form of depression is particularly worrying for clinicians, as patients may suffer for many years without hope of respite.

In recent years, the search for the underlying causes of depression have focused on the Default Mode Network (DMN), a system in the brain that is a core aspect of our consciousness and sense of self. When you are remembering the past, daydreaming, or thinking about yourself or others, the DMN is active. The DMN is found to be overactive in patients with major depression, perhaps causing the negative thoughts and ruminations associated with depression 3.

Two of the studies recently released by Prof Nutt’s group suggest that the classic psychedelics LSD and psilocybin may be antidepressive, through their interactions with the DMN. The first of these studies uses the natural psychedelic psilocybin (click here to learn more about psilocybin). Carhart-Harris’ group had previously discovered that psilocybin reduces the activity of the DMN 4, prompting them to investigate psilocybin and depression.

The study, recruited 12 patients with severe depression that had failed to find effective treatments after many years of suffering. They were given a moderate dose of psilocybin, then seven days later a high dose of psilocybin, both times in a comfortable setting with a clinical psychologist present to offer support and therapy. The patient’s depressive symptoms were measured before, one week after and three months after the trial using an approved scoring system. All the patients showed improved depression scores after a week, and many retained this improvement after three months 5. 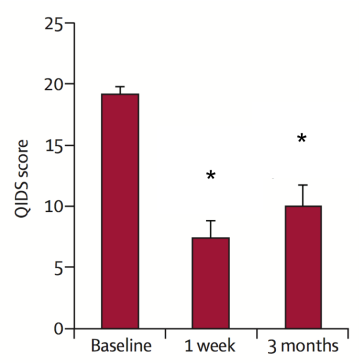 Although this was a small study that suffers many drawbacks, it’s a promising step forward into establishing psilocybin as a potential treatment of depression, when used as a therapeutic tool in the correct setting.

The second study addresses LSD (click here to find out more about LSD), a synthetic psychedelic drug that works in a similar manner to psilocybin. For the first time ever, Prof Nutt’s group performed multiple neuroimaging experiments on patients that were given LSD 6. The results are complex and extensive, but one of the most interesting findings concerned the DMN. Nutt’s group discovered that LSD reduced the activity of the DMN, and that this was associated with ‘ego dissolution’ in the patients. This means that patients lost their sense of self and became less focussed on the typical worries of everyday life. This evidence supports the idea that classical psychedelics may be a unique tool in the treatment of depression, through their actions on the DMN.

Now we know that both psilocybin and LSD act on the DMN and cause a change in cognition that may be used to treat depression when combined with psychological therapy. So how exactly do these psychedelics influence the DMN? We know that classic psychedelics work by affecting serotonin levels in the brain. Interestingly, some evidence points to serotonin being involved in the function of the DMN 7. But this is just scratching the surface. There is a huge amount of work to be done before we fully understand how psychedelics work in our brains.

LSD and psilocybin share structural similarities with the neurotransmitter serotonin

Professor Nutt’s group will continue to investigate psychedelic drugs and how they could benefit our lives. Studies like these will help us to understand consciousness and find treatments for debilitating diseases.

We are entering a new age of psychedelic science… as Dr Stanislav Grof said, “It does not seem to be an exaggeration to say that psychedelics, used responsibly and with proper caution, would be for psychiatry what the microscope is for biology and medicine or the telescope is for astronomy.”

Read more about The Beckley Foundation and the Psychedelic Science crowd-funding campaign.