DMT is known as ‘The Spirit Molecule’ – and for good reason. DMT is one of the most powerful psychedelics on the planet, naturally occurring in many species of plants, and is thought to be released in tiny amounts in mammal brains. Although the issue is controversial, it’s also possible that the release of natural DMT is a factor in out-of-body experiences or spiritual states.

DMT is a molecule that mimics the neurotransmitter serotonin, much like the other classic psychedelics LSD and psilocybin. DMT’s psychological effects are mostly due to its binding to the 5-HT2A receptor, which is found mostly in areas of the brain associated with high-level cognition: self-awareness, emotions and introspection.

When smoked or injected intravenously, DMT causes a very rapid, very intense psychedelic experience which lasts a few minutes. Users report the feeling of being ripped from their bodies, and thrown through space at incredible speeds. DMT produces intense visual and auditory hallucinations of otherworldly landscapes, hidden dimensions and god-like beings. It often produces deep introspection in its users, allowing the revisitation of past memories and providing a fresh perspective on life.

DMT can also be ingested in the form of the ancient psychedelic brew ayahuasca, which is drunk in traditional healing ceremonies throughout South America. This experience is significantly different from that of smoked or injected DMT, lasting several hours rather than several minutes, and often causing vomiting and diarrhea. Despite the relatively unpleasant sounding experience, ayahuasca has been associated with a variety of therapeutic benefits, including the treatment of depression.

Here, I want to provide you with a detailed guide on how to procure DMT-containing plants, and how to extract this powerful psychedelic compound for personal use. 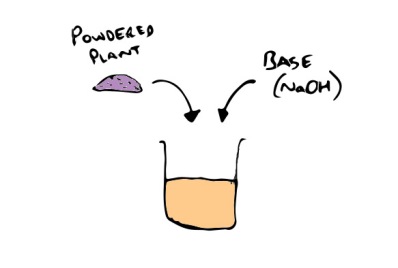 Where to get DMT-containing plants

This guide for DMT extraction is specific for the bark of the Mimosa hostilis root, as this is the most commonly purchased DMT-containing plant. It usually comes as a course powder, shown here:

Mimosa hostilis root bark can be bought online from various vendors, but may not be able to be shipped to your country if there are restrictions on DMT-containing plants:

Although this guide is specific for M. hostilis, the extraction should work with any DMT-containing organic material – you just need to make sure you adjust the quantity of starting material depending on how much DMT is present in the species of plant you’re using.

Another popular DMT-containing plant is Psychotria viridis, which is used in traditional ayahuasca brews. It is also known as Chacruna to indigenous peoples.

If you are patient, you can grow your own DMT-containing plants from seeds, which are often not regulated to the same extent as plants. An example is Reed Canary Grass seeds, which can be purchased online in some countries.

The chemistry of DMT extraction (simplified)

This is a simplified explanation of what’s happening during the chemistry of DMT extraction. Skip ahead for the step-by-step instructions!

The most common technique is called an ‘acid/base extraction’, but it’s pretty complicated. We’ve decided to talk you through the ‘straight to base’ extraction technique, which is a little easier. Here’s the outline of the chemistry:

Your DMT containing plant is ground into a powder and mixed with a base, most commonly sodium hydroxide (NaOH). This dissolves the plant matter, leaving you with DMT molecules floating around in a base solution.

The final step involves getting the DMT molecules out of the non-polar solvent, which can be done by evaporation or freezing.

The simplified chemistry of the “Straight to Base” extraction method

Adapted from Noman’s tek on the DMT-nexus.

Please read the guide thoroughly and make sure you understand the process before attempting it.

STEP 1: EXTRACTING DMT FROM THE PLANT 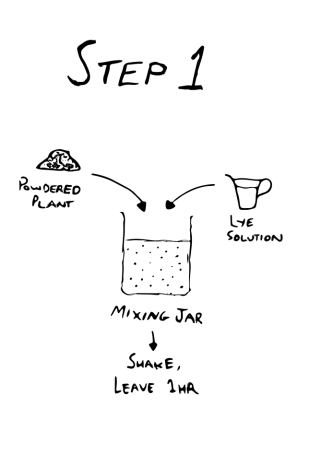 STEP 2: EXTRACTING THE DMT FROM THE BASE SOLUTION

STEP 3: EXTRACTING THE DMT FROM THE NAPHTHA SOLUTION 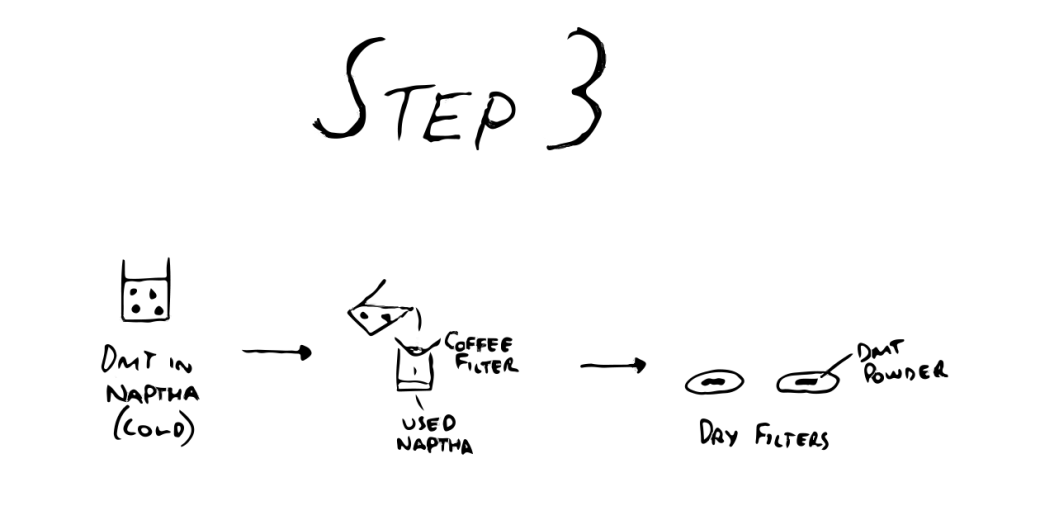 Adapted from Lazyman’s tek on the DMT-nexus

For those of you that don’t like the look of all those steps, and just want to get your DMT out of your plant as quickly as possible (without worrying about purity or yield), here’s a simpler protocol:

How do I know the purity of my extracted DMT?

All you have to worry about when you make your own DMT is how efficient you’ve been in following the instructions. If you’ve used poor quality ingredients, or done a messy job (i.e. carried over some of the base solution by accident), you may end up with more impurities in your DMT powder. This can be unpleasant to smoke.

There’s a myth that the colour of DMT powder tells you its purity – this isn’t true, as there are a number of factors that contribute to the colour of DMT powder. Generally, if your powder is white, yellow, red or brown, it is safe to smoke. If it is green or blue, something has gone wrong in your extraction and you should try again.

DMT is illegal in most places. I don’t condone breaking the law or using DMT outside a legal and traditional context. If you do decide to take DMT, make sure you research its effects and risks.

DMT is a very powerful psychedelic and should be treated with respect. You should understand how best to prepare for a psychedelic experience, and integrate it afterwards.

Be aware of your dosage! A recommended first-time dose of smoked DMT powder is 15mg.

When following these extraction guides, make sure to understand the process before you start. If you are using a DMT-containing plant other than Mimosa hostilis, make sure you are aware of the differences and adjust your procedure accordingly. Always wear rubber gloves and safety goggles, and a dust mask if you are grinding up plant matter.

If using lye (sodium hydroxide), avoid getting it on your skin, and always wear safety goggles. If you get it on your skin, wash it off with copious amounts of water (and ideally use vinegar too, if it’s within reach, to neutralise the lye). If you get it in your eye, run your eye under tap water for at least 20 minutes and see a doctor. If you spill a large amount, neutralise it with vinegar before cleaning it up. When adding lye to water, add it slowly and mix well.