Cycling enthusiasts are all over the place these days… donning their questionable lycra outfits at ungodly hours to fly through the standstill rush-hour traffic, saturating our cities with bright neon colours and flashing lights. Maybe some people don’t really get the appeal… but to many, cycling is fun, it makes them happy, and it benefits their lives in loads of ways.

It’s not without its risks of course, but so are many things in life. We get around those risks by wearing helmets, lights and fluorescent jackets. The government builds us cycle paths and spends money on education and awareness. Overall it’s a pretty good system; people understand the risks and work hard to minimise them. And people have a great time cycling.

Let’s say the government becomes unhappy with the numbers of cycling-related injuries and deaths. They respond by increasing their campaigns of safety-awareness, introducing new regulations to keep cyclists safe on the roads, and build better, safer cycle paths. Maybe they even pedestrianise city centres! I think most people agree that this is a pretty rational reaction.

Now let’s say that instead of that rational response, the government decides to put a blanket ban on cycling. They decide that the number of deaths is too high, and the risk is too great. Anyone caught cycling, or selling a bike to someone (or even encouraging their friends to cycle), could end up in prison; that’s how serious the government is about abolishing cycling.

But this doesn’t stop people from wanting to cycle. They enjoy cycling, and feel their freedom is being abused by this blanket ban. So they keep cycling, but now they have to stay away from the police; so they cycle on dangerous country roads, where their risks of getting hit by a car are much higher. They ride on illegally-manufactured bikes, that are unsafe and unregulated. They aren’t aware of correct safe cycling behaviour, because the government has stopped funding their information campaigns. Now, naïve cyclists are at much greater risk of injury, and could also end up in jail.

Does that approach sound more sensible? We all know it doesn’t make sense, and that’s why the government responds to cycling risks by building better cycle paths and keeping the public informed with cycling awareness campaigns.

And here’s the message you’ve surely by now figured out yourself: this reasoning can be applied to drug policy. Many drugs are relatively harmless, and most are less dangerous than activities such as cycling. In fact, there are all sorts of drugs that could benefit your life, and benefit society as a whole. We can minimise the risks associated with drugs by ensuring they are manufactured responsibly, in a regulated legal market. We can limit their sale to responsible adults through licensed vendors. We can fund information campaigns that can spread knowledge about drugs: how to use them responsibly and how to avoid risky behaviour. 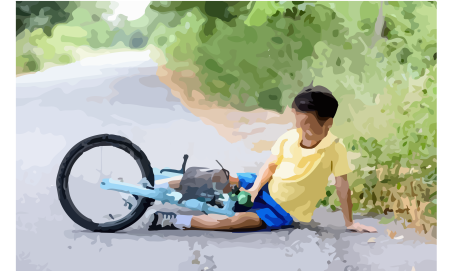 Banning all drugs will just push people onto those dangerous country roads. Perpetuating the myth that ‘all drugs are bad’ just keeps people ignorant of the true risks and benefits of drugs. Naïve drug users are at a much greater risk of injury than if they were taught about responsible drug use, and protected by safety measures.

It’s the government’s responsibility to safeguard us and minimise the risks in our lives without corrupting our freedom. That’s why cycling isn’t illegal, and why drugs shouldn’t be either.

5 thoughts on “Why isn’t cycling illegal?”